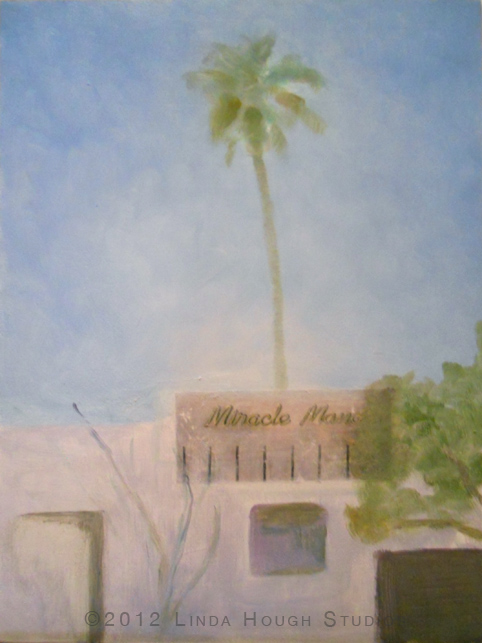 As soon as I returned to Palm Springs, an old desire surfaced: to paint the desert hotels and houses that were etched in my mind growing up. At the time, I didn’t realize that they were part of the mid-century modernism design movement. To me, they were just the buildings I grew up around.

So now that I got that big anger expressed, and some big mountain energy going, I’m settling in to work on this series.

I took a number of photographs of Miracle Manor Retreat, a renovated mid-century modern boutique spa in Desert Hot Springs. Key to the work would be the neon sign that graces the top of the entrance. How to depict that accurately? After trying on my own to replicate the sign, I resorted to technology.

Using a process called image transfer, I was able to get the look I was after. Then, I began blocking in the larger shapes. Next, I’ll refine the details and add ‘the glow’. My new desert series is in progress!

By continuing to use this site, you agree to the use of cookies used to enhance your experience here. more information